The first of a series of anecdotes sent in by members of the WEA.

On first thoughts, beginner's harmonica class might seem to rank alongside pre-school violin on the scale of collective musical awfulness. Nevertheless, keen to enhance my musical skills and to meet like-minded people, I enrolled in John Hastwell's (aka Aussie Bob's) basic blues harmonica course at WEA in February. In six weeks I aimed to learn this instrument to the point of performing at one of Adelaide's open mic evenings, possibly Finn McCool's in Norwood to which I would cycle after class.

The first week we were exiled to one of the Cottages, probably a good thing for the aural wellbeing of our fellow students in other classes. Looking round the group, this was definitely adult education, no one under the age of .... I don't like to say, but let's just say I felt quite at home with my peers. At first glance we appeared a motley crew, some fresh but eager novices, others veteran blues aficionados and a couple of folkies, but as the weeks progressed we got to know each other as we pursued a shared love of music. John was a great teacher, very encouraging with even our feeblest attempts to bend the notes, as he demonstrated various harmonica styles: straight harp (or folky), cross harp (bluesy) or slant harp (sad). (See, I was listening!) Each week he would ask us which tunes we had learnt since the last class, only to get the response, "No! We just want to jam and play blues." Such was our devotion to our art. 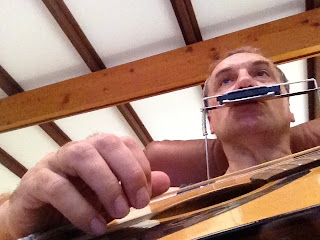 I found playing the harmonica totally infectious. Concealed in my pocket, I would whip it out at the traffic lights on Angas Street whilst cycling home, much to the amusement of neighbouring  drivers. On one occasion I won the attention of two pretty young women in a sports car, only to lose it immediately to my dogged determination to master the blues scale, and of course the lights changing. But they waved cheerily as they sped off into the night.

In class John would give everyone the chance to play, and whatever our individual abilities, we could hear ourselves collectively improving week on week. Whether the students in the recreation area outside the classroom agreed, is hard to tell, but no one complained. As we each performed before the group there was a wonderful sense of support and a forgiving deaf ear turned to any slips, but as our teacher said somewhat optimistically, "there are no wrong notes on the harmonica." Trust us, John, I'm sure we can find some.


One week an elderly couple joined our class. As their turn came to demonstrate their note-bending skills, they smiled and looked blankly at our teacher. Someone lent them a harp as they hadn't brought their own instruments.  After some coaxing, the lady brought the harp to her lips and gave a timid little toot. John looked on bemused, wondering how his impressive coaching skills had failed so spectacularly. He was also very good at remembering names, but had to ask this couple theirs. Not seeing them on the register, he probed.
"Which class are you enrolled for?"
"Basic blues harmonica," they replied confidently.
"Well you're not on my list."
"Oh," they said. "Our course begins on the 18th of March. Today."
"Well, this is February. We'll see you next month."
There's nothing like being ahead of your time.
The final week, one of the group brought in a guitar amplifier, and we all took turns at playing our harps at volume with distortion. The difference was remarkable as we were transformed from note-shy wallflowers into howling rockstars to our favourite tune: twelve bar blues in G. That night after class there was a plan to go the the open mic at the Gov to perform it in ensemble. Sadly, I was unable to attend. My own public harmonica debut was a nervy solo in Robert Johnson's Love in Vain at one of the Summer Sundays at the Bay concerts in Moseley Square, Glenelg. Unused to playing with a harmonica cradle, Dylan-style, whilst accompanying on guitar, I breathily chased the harp around,  my lips never extending quite far enough to catch it, no matter how ridiculous the pout, to squeeze out its intended but elusive lonesome wail. But none of the audience left and I played it, after just five weeks of tuition, a testament to both tutor and institution.
Harmonica is the ultimate portable instrument, better even than the ukelele. It is also the most intuitive. No prior musical knowledge is required, just an ability to count to eight, to feel the blues, breathe in and out (mainly in), and to wiggle your hands in that cool way you see in movies set in the Deep South. Basic blues harmonica at WEA is a fabulous way to learn an instrument, make new friends and have fun. If you've got the blues then mosey on down to Angas Street on a Thursday night and raise some mojo. Roll on intermediate blues harmonica at WEA. 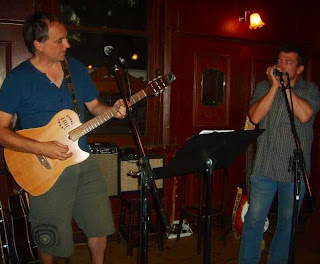 Playing at the Dan O'Connell with Brian "the harp" Doddridge, a proper harmonica player.